On June 10, 1986, the supportive community for homeless and mentally ill persons, which  some compassionate and forward thinking people had been slowly building, became At Jacob’s Well, Inc. Throughout this year, we celebrate the 30th anniversary of our founding and the hundreds of homeless people who have received housing through our programs. 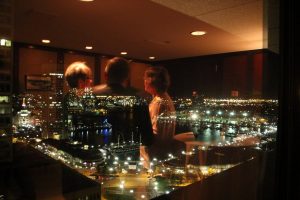 Our most successful fundraiser in AJW’s history was held on September 25, 2015. The venue was Baltimore’s Center Club on the 16th floor of the Transamerica Building. Along with spectacular views of the Inner Harbor, the event featured keynote speaker Dawn Kirstaetter, (Deputy Mayor: Offices of Health, Human Services, Education, & Youth), catering by the Center Club and a silent auction.  More than 150 people attended; many gave donations in addition to their ticket purchase.  Thanks to Colin, Matt, Leslie and all who worked so hard to make this a great success!  Some pictures of the event can be found here.