For answers to Frequently Asked Questions about At Jacob’s Well, click on the FAQ link below. 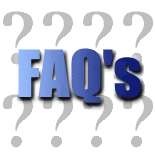